skip to main | skip to sidebar

Still trying to figure out the best way to video a painting in progress. 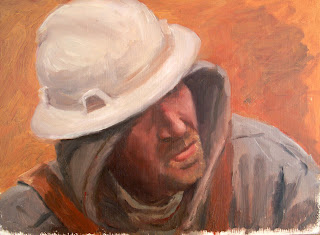 Finished painting "Cold Work". This is a painting from a photo I took of a guy working down in the street outside of my office window. Finished, except for the signature, and the notes on the back. Often I write notes on the back of paintings. So, when it dries a little more, I'll sign and note it. (I spent approx. 20 more minutes on it tonight.)
Posted by One He Loves at 7:52 PM 3 comments:

Okay. I've caught up with last year's painting total. I painted this today, actually yesterday, since it's 1:30 am as I write this. I decided to film this painting. After viewing this, I wish I had realized my head would be popping into the screen so much. I would have combed my hair after my mid-afternoon nap. Ha!
I painted this from a photo I took of a guy warming up in the Canticle Cafe, on the corner of Liberty and Vine, in the Over-the-Rhine neighborhood of Cincinnati. It's a 5"x7" oil on panel. I'm going to work on it a little more tomorrow (or should I say today?). My tape was one hour, so I quit painting when the recording stopped. I think I'll need still 30 minutes or so to bring the painting to a finish.
So here's a much edited version of the video. 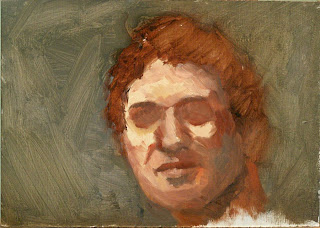 It's been awhile, but I'm back. In 2008 I painted a total of 2 paintings. The sad thing is, I can only remember what one of the paintings was. All day I've tried to remember what the second painting was. Oh well. I'm not planning to post a daily painting, but I am planning to paint daily or as close to that as I am able in 2009.

Today I did a head study of a young man who worked in the book department of the company where I work. His name is Tyler Blue. Below is the completed head study. (After taking photos, I suddenly remembered how much I hate photographing wet paintings. Glare after glare after glare. UGH! With this in mind, I may not be posting many paintings. It actually me longer to take the photos and post this than it did to paint the painting.) P.S. another New Year's resolution is to not complain so much.
Posted by One He Loves at 5:15 PM 2 comments:

DEATH IN THE FAMILY 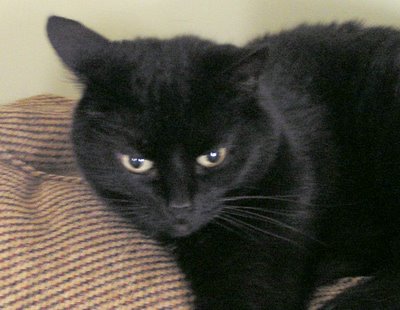 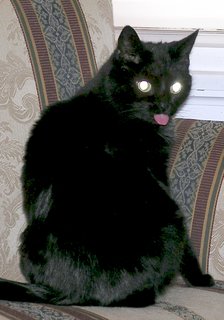 I wanted to post this photo, because I always said, with Chelsea, it's all about attitude. She never had any problem letting me know exactly how she felt about anything.

I'll miss her (and her annoying little ways). She was a good little cat.

I'm so thankful to the Lord. I put her in His hands and trusted Him to take her without suffering. She went very peacefully. 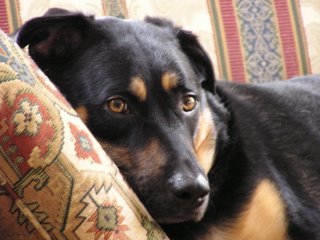 Silas and I went for a drive. I think he'll miss her. They were pretty good buddies, although sometimes he would get up, run her out of the room and shut the door behind her. Chelsea was quite the chatterbox. She usually held her lectures until morning, but there were times when she would decide to talk and talk and talk during the middle of the night. Those were the times when Silas would run her out and shut the door.

When she would come into the room in the night, she would always let out one loud announcement that she was about to leap up on the bed, then up she came. I will say that more times than not, that's when Silas would jump off the bed and go shut the door. In reality he probably did it so she wouldn't leave and come back, and wake everyone up with her announcement. I like to think, though, it was because finally his little family was all together, snug as a bug in a rug, and he would close the door to keep us together where he could more easily watch over us.

I'm going to take a break from blogging. I'll be back in a week, maybe two. I just don't have the heart for it right now.
Posted by One He Loves at 3:25 PM 11 comments: 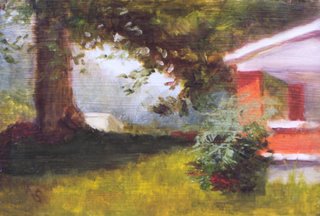 SIDE PORCH
(Private Collection)
Posted by One He Loves at 10:54 PM 3 comments: 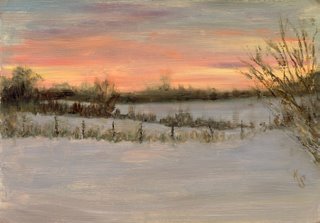 WINTER MEMORIES
(5x7 inches oil on panel)
I grew up on a small farm in Lebanon, Ohio. This is the view from our side yard looking across the back of my Grandma and Grandpa Davis' backyard. Across the fence line was our backfield. Just on the other side of the middle tree line was Waynesville Road and beyond that the neighbor's field. I sometimes wish I could go back to those days on the farm. But, I don't think it's good to dwell too much in the past, because we miss the present.
CLICK HERE TO BID
Posted by One He Loves at 10:23 PM 4 comments: 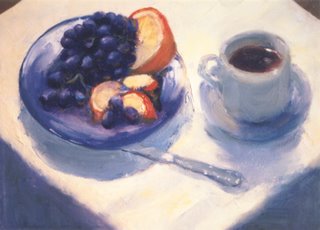 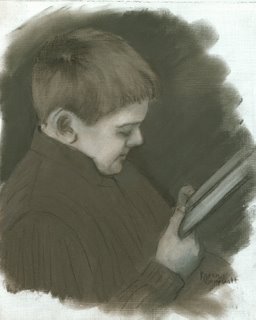 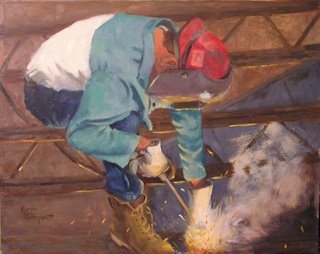 Just as I was starting to paint last night I got an emergency phone call. The rest of the evening was spent making calls and praying. This morning I decided to post a painting I did several years ago.
If you have any interest in purchasing this painting, please drop me a quick note in the comments link below.
Posted by One He Loves at 7:15 AM 2 comments: 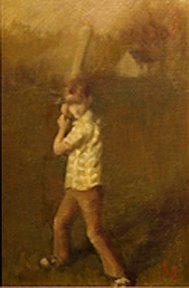 HE SLIPPED AWAY
(Private Collection)

This is a painting of my cousin Ronnie, when he was a little boy. I took the reference photo in the backyard of our farmhouse with my 126 camera. I was just a kid at the time, too (five years older than Ronnie and his twin brother Donnie).

On December 6 it will be 20 years since Ronnie slipped away at the age of 21. I've always loved this painting (maybe because it's of him) and decided to post it today.
Posted by One He Loves at 10:15 PM 6 comments: 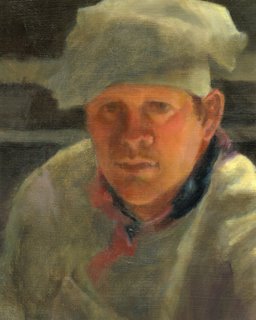 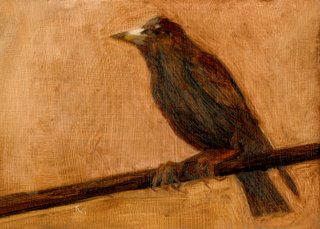 HE WATCHES ME
(5x7 inch oil on panel)

This past Saturday I had the honor of being part of a group of people who were blessed to go to Washington Park in downtown Cincinnati for an outreach ministry. Washington Park is located directly across the street from beautiful Music Hall. In a Cincinnati Post article written by Kevin Osborne the park was once known as the "Queen City's crown jewel." But now according to Osborne it is "a haven for stumbling-drunk winos, beggars and drug dealers".

I've always heard it referred to as the Homeless park. It is surrounded by various social service agencies.

We were there to reach out to the homeless people in the park. Our church has a wonderful bus ministry and Samaritan ministry. Each Sunday the bus goes down and picks up anyone who wants to come to church and the Samaritan ministry feeds them breakfast in the morning, and dinner in the evening. The only requirement is that they attend the service after breakfast, or the service before dinner.

Anyway, last Saturday, we were blessed to be able to give out 200 brand new winter coats to those in need. We also served pizza at the drop-in center.

But, the reason I tell this whole story is to tell you about this one little lady who came to the park that day. She was dancing and having a good time. After Pastor finished talking to the people gathered at the Gazebo, he held the microphone to her mouth, and she sang one of the most beautiful versions of the song "His Eye Is On The Sparrow" that I've heard. Her voice was as clear and sweet as a bell.

The thing that is so amazing about that song is the simple truth of it's words..."I sing because I'm happy; I sing because I'm free; His eye is on the sparrow; And I know He watches me." If God watches over every single sparrow in this world, and not one falls without His knowledge, how much more value are we to Him? Amazing. I couldn't believe how many of these people who had reached the bottom walked up to me and hugged me or smiled into the video camera I was operating, and told me how very blessed they were. 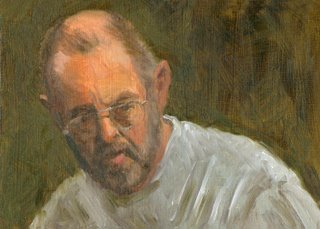 This is my brother, Larry. He's ten years older than me. My first remembrance of Larry took place somewhere between my being 2-years and 5-years-old. I know this because, when I was in kindergarten, we lived in the house on Mulberry Street. This event took place when we lived on Stubbs Mill Rd. I didn't walk until I was almost 2-years-old (some kind of problem with one of my legs not growing.) Anyway, I remember that Larry made us (me and my sisters) Superman outfits for our Troll Dolls. I thought he could do anything. I was right...he is a genius!

I went to Bonita's show tonight at Closson's. It was a great show. I met the neatest lady there. Her name was Sue. In September she and her husband will be married 51 years. I found Sue to be fascinating. I hope we meet again someday.